The Ryder Cup: it’s brilliant, it’s patriotic, it’s a rare moment of bonding that the game rarely shows. For one week, the world’s best from the U.S and Europe team up and compete in a dazzling biennial affair. Hosted this year in the U.S. at Medinah Country Club, outside of Chicago, the golf world will be watching as Europe tries to defend the title and keep the cup overseas. Below are 5 videos every golfer should watch before the first stroke is struck. Each video has been selected to emphasize the emotion, patriotism, and strategy all intertwined into a tournament unlike any other: The Ryder Cup.

Context behind the Ryder Cup:

Before 1985, the U.S. had dominated the Ryder Cup only losing three times since it’s inception in 1927. However, in 1985 the tides began to turn with the help of young, charismatic golfers like Seve Ballesteros, and the competition has never been same since. Below is a chart showing which teams won, by how much, and who lead the team to victory and defeat. 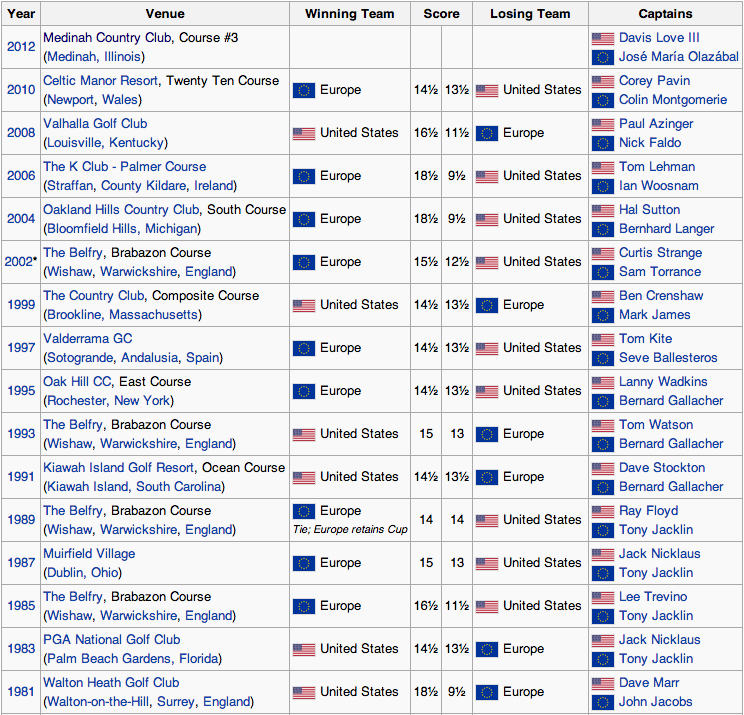 War at the Shore – 1991: Final Hole of Berhard Langer and Hale Irwin

The American team hadn’t held the cup since 1983 and it all came down to the final hole where Bernhard Langer and Hale Irwin fought it out to the last putt. Watch as each player limps to the finish line, only to leave every thing their team worked for, one putt short.

Seve Ballesteros Lifts the Team with Magician Like Par Saves

With the 1991 loss at the War on the Shore still fresh in the minds of many players, along with the U.S. team squeezing out 93′s retention of the cup, Seve Ballesteros, playing in his 8th and final Ryder Cup put on a display that lifted the European team’s spirits all the way to a victory.

The last Ryder Cup provided entertainment almost unparalleled in the Ryder Cup history. With the Americans down going into the last day, the single matches were crucial for victory. Slowly, each American began picking off player after player and the Cup came down to  the match between McDowell and Mahan. Watch as the slugfest ends.

In one of the most highly contested and tightly analyzed Ryder Cup in, perhaps, it’s history, the U.S. team comes back in heroic fashion on the final day to win the cup since 1993. Watch as chips fall and putts drop in some of the most exciting golf ever viewed.

Having only won 3 times since 1927, the European team needed a change. Take a close look at an example of the change, when young Seve Ballesteros drives the green on number 10 at the Belfry. The importance in this video lies the beginning of what made Europe such a dominant force: boldness, bravado, and execution, but this video also foreshadows some of the decisions the players this year will be faced with on number 15 at Medinah – the drivable par 4. Watch as Seve executes his shot with inspiring confidence.

During every other year when the Ryder Cup comes around, the media begins to get chippy. Certain comments are construed one way and extorted the next. Even the great Ben Hogan found himself in a media frenzy over nothing more simple than a few steaks, ham, and ground beef.

Read here for more coverage from the New York Times and Ben Hogan at the Ryder Cup.