A round of golf can often be uneventful. But when you play at any of the below listed courses, you raise the odds of an adrenalin-pumping round. 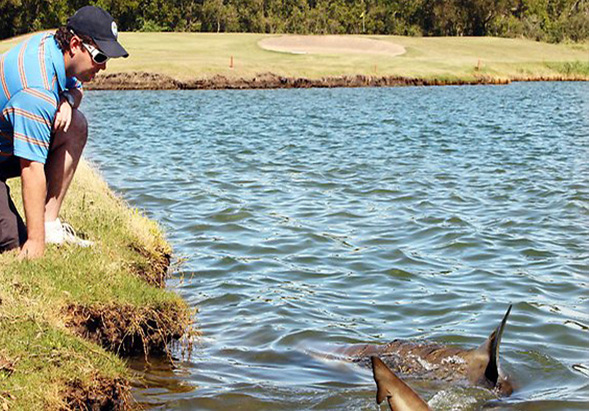 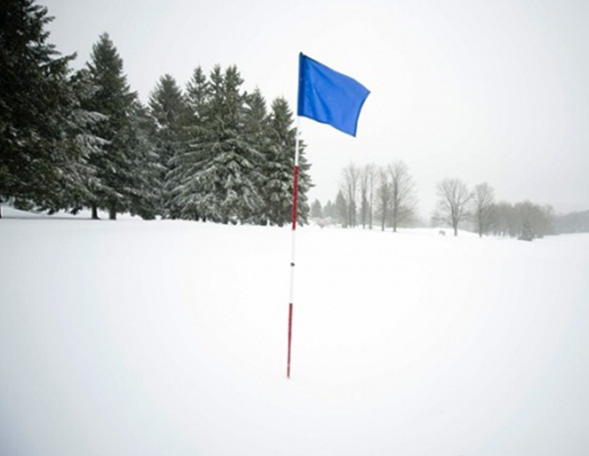 Uummannaq (click here for pronunciation), the coldest course in the world, is located 600 km north of the Arctic Circle and since 1997 has been the home to the World Ice Golf Championship. The picturesque par-36 9-hole course (with your typical mix of five par 4s, two par 3s and two par 5s), is located between two glacial icebergs – the moving ice results in a constantly changing layout as weather conditions fluctuate.

With the backdrop of huge mountains of ice glistening in the sun and course temperatures that fall below 50 degrees below zero, some local of the rules have added that suit the course conditions – notably the use of a fluorescent orange ball (as white balls are easily lost against the snowy backdrop), and ban of graphite clubs that have a tendency to shatter at these cold temperature. 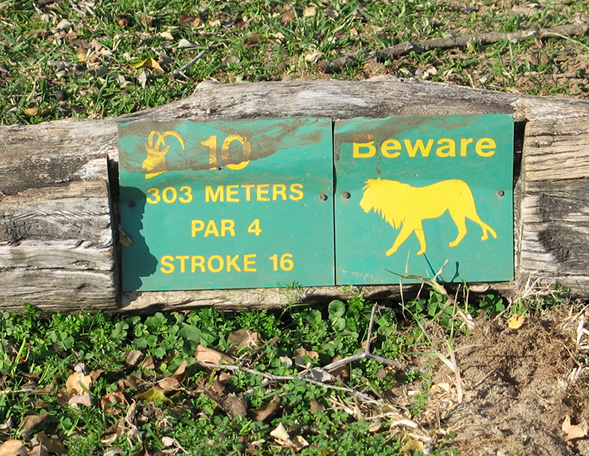 Skukuza Golf Course (pronounced Ska-koo-za) is a 9-hole course on the outskirts of Skukuza Restcamp. Built originally in 1972, it is now open to the public. There are no fences around the course, allowing the animals from the Kruger Park to wander in and out. Golfers are welcomed to the Course by a Sign board that states “Beware: Dangerous Animals. Enter at Your Own Risk”, which helps explain why an indemnity form has to be signed before teeing off at the first hole. 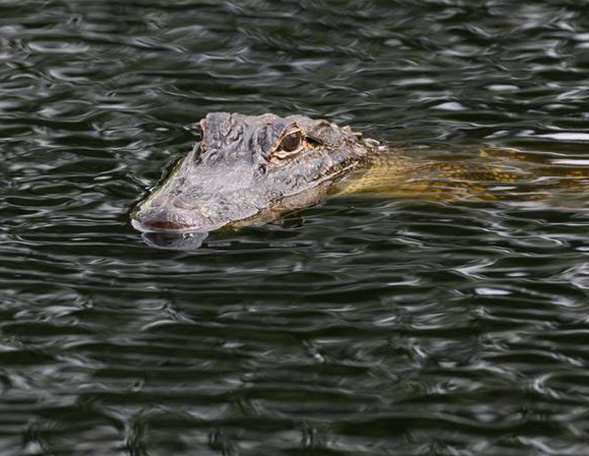 Harbour Town Golf Links is rated as one of America’s 100 greatest courses you can play but it became one of the most dangerous during the Heritage Tournament in 2001. Kip Henley was caddying for Brian Gay when Gay’s ball became stuck in the mud on the fifteenth green. Kip went to get the ball back and discovered it was guarded by a 6-feet alligator. While he may have been able to ask for a free lift, Kip calmly hit the creature with a rake until it left. 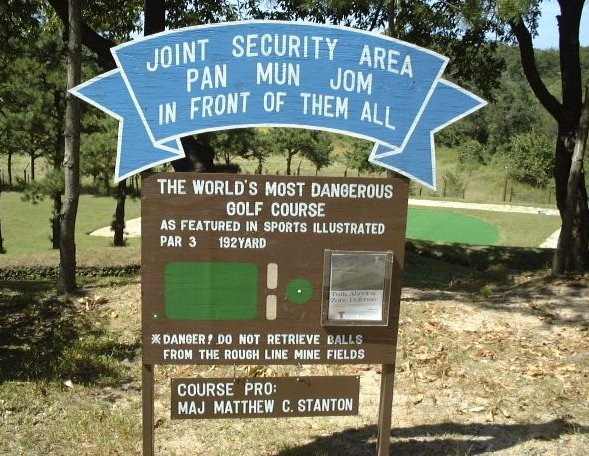 The golf course in Panmunjom, which lies in a demilitarized zone between North and South Korea is often called the most dangerous golf course in the world. It has earned this monicker not for deep hazards nor for unplayable rough, but because of the mine fields located on three sides of the course.

The golf course was constructed in 1972 for the service members of Camp Bonifas, the U.S military installation in Panmunjom and is not open to outsiders. It is a lonely outpost (no theaters or restaurants) and the course provides a much needed respite for the 50 U.S soldiers stationed there.

The course is made up of a single (and deadly) par 3 measuring 192 yards – but it plays more like a 250 due to the vicious winds. There are not many places where you have a lost ball due to explosion, making Panmunjom the “Most dangerous golf course in the World”

At times pro-golfers get a bad swing and the ball may well end up stuck in a tree. Well, when that unfortunate event happens there are 3 ways out for a continuing play,

a. Unplayable – Declare the ball unplayable under Rule 28 and take a one-stoke penalty

b. Lost Ball – One-stoke penalty and return to the spot if the previous stroke and replay the shot

c. Play It as It Lies – Meaning, climb the tree, get into a position and take a swing at the ball. By doing so you avoid the one-stoke penalty.

On the tour, where every stroke counts, the process are apt to choose option c – see the famous examples of Bernhard Langer and Sergio Garcia. These guys really do have every swing in their bag!

For several decades 59 has been the magic number on the PGA Tour. 6 Players so far have shot 59 on the PGA Tour. Here is the list of players who achieved this rare feat – which one is your favorite?

The first-ever player to shoot 59 during the second round of the 1977 Memphis Classic at Colonial Country Club.

He began his round on the back nine, and dropped an 8-footer on the final hole to mark his name in the history books. His score included a 11 birdie and an eagle.

Beck shot a 59 in the third round of the 1991 Las Vegas Invitational on the Sunrise Golf Club (par 72) in Las Vegas, Nevada.

His round included 5 pars and 13 birdies overall (a PGA Tour record for birdies in one round) including a three footer on the 18th hole. Beck finished tied for third in the tournament.

During the first round of the 2010 John Deere Classic, Goydos became the fourth player in PGA Tour history to shoot a 59 . His round included 12 birdies and 6 pars.

His 8-under 28 on the back nine matched the lowest nine-hole score in relation to par on the PGA Tour. He is also the oldest person to post the number by seven years.

Stuart Appleby became the 5th person to record a 18 hole score of 59 in PGA history at the 2010 Greenbrier Resort to win his fifth PGA Tour title.

Appleby birdied the last three holes, giving him nine birdies and an eagle in a round of 11-under par 59. He is also the first non-US golfer to break 60.

Jim Furyk became the sixth golfer in the history of the PGA Tour to join the 59 Club by shooting a 12-under 59 at the BMW Champioship, Conway Farms.

Continuing with our series from The Itinerant Golfer’s quest to play all top 100 American golf courses, The Scratch Pad is glad to bring you a profile of the 55th rated golf course in America, Garden City G.C, New York.

Today I’ll be playing at Garden City Golf Club. Garden City is just a little over 20 miles from LaGuardia, but the route is mostly through business and residential areas so it was a good 35-40 minutes before I pulled into town.

Once I pulled up to the club and parked I did something that I’ve never done before at any other golf club I’ve visited. I stepped out of my car and put on my blue blazer. Upon arrival at Garden City Golf Club all members and guests must be wearing a jacket and leather shoes. Having a jacket rule for entrance to the clubhouse during evening hours is not uncommon, but I’m not aware of any other club in the U.S. where it is a requirement all day long. Since I would be wearing a jacket I also wore long pants to complete the ensemble and brought my golf shorts in a bag so I could change in the locker room. I found it rather humorous how easy it was to tell the difference between the members and the guests. The guests seemed to have all arrived like me, wearing slacks to go with their jackets. The members, on the other hand, were clearly more comfortable with this unique piece of club culture and were walking around in their jackets with short pants and loafers. I loved it!

Garden City Golf Club was founded in 1899 and throughout its 111 year history has always been a golf club exclusively for men. The course was originally designed by Devereux Emmet, and then redesigned in the 1900s by the great amateur golfer Walter Travis. Travis was a founding member of Garden City Golf Club and in addition to having a hand in the design of the course he is very much a large part of the club’s history. There is a wonderful biography about this great golfer entitled The Old Man. If you are interested you can pick up a copy here.

As you would expect of a club established in the 19th century, Garden City Golf Club has a rich tournament history having been host to six events put on by the U.S.G.A. There was the 1902 U.S. Open, the U.S. Amateur in 1900, 1908, 1913 and 1936 and finally the Walker Cup in 1924. These days the only event held at Garden City Golf Club is the Travis Invitational which is one of the premier Mid-Amateur events in the U.S.

We elected to play the Championship tees which play to a par of 73 and a yardage of 6,911. Although this is the longest tee option on the scorecard, players who want to stretch it all the way out can move back and play the plates which give just a little bit more added length.

The photo below was taken on the first tee which is a friendly starting hole of a mere 302 yards with a par of 4. Bombing driver is an option, but I think the smarter play is a nice little 200 yard shot to the left side of the fairway. 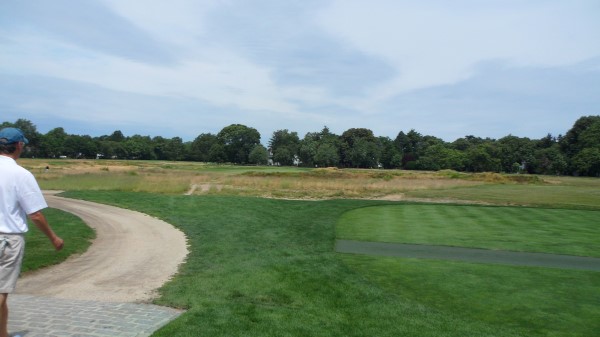 The fairway on the first hole is a split fairway of sorts. If hitting a shorter shot the line is to take it down the left hand side. You can see the ball lying there in the fairway in the photos below. If hitting driver its better to play to the right side of the hole and have you ball land in the other part of the fairway. David hit driver here and you can see him in the white shirt up around the green. That is near where his ball landed. 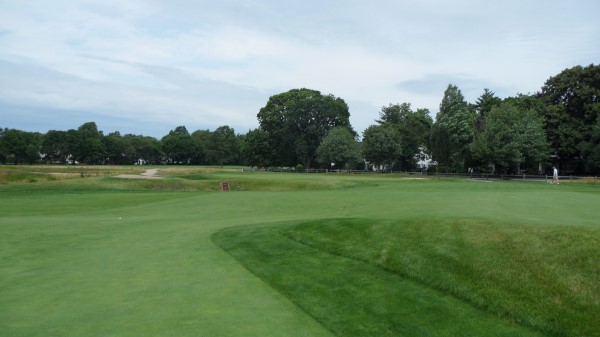 The 2nd hole is a par 3 that plays 137 yards over a small valley. There are plenty of bunkers and long grass to cause problems for tee shots that come up short. The photo below was taken from the green looking back towards the tee box. This is the only par 3 on the the first nine holes.