Murray Irwin “Moe” Norman was a legend. He was arguably one of the best ball strikers ever.

His accuracy and ability to hit shot after shot perfectly straight gave him the nickname “Pipeline Moe”. But it is unfortunate that many don’t even have heard of him, probably because of a short career. He turned professional in 1957 but played just 27 PGA tour before returning to play in Canada after a bitter experience with the officials. But nothing can take away the serious talent he possessed and we’ll never know what he might have achieved if he had a longer career.

Watch this below video (or Click here) on Moe Norman. Truly inspirational!

Produced by Aford Awards a UK manufacturer of golf trophies as well as other glass sports trophies.

For those of you who follow our blog, one of our guest posters is Shawn Augustson, a student at the College of Golf and writes the blog Golf with Shawn and has shared with us some of his recent lessons. Here is one such post for the benefit of MyScorecard members.

We have many different reasons why we like to golf. Some find it as a way to relax, others enjoy the challenge… but the common denominator is that we all find it fun. This leads me to the question that if we want to have fun, why do we set ourselves up for failure at the first tee?

I have friends who like to stretch the course out and play as far back as they can. “I want to get my money’s worth and see the entire course”, is what I have heard time and time again.

The simple reality is this. They do not have the skill set to play from the distances they “feel” they need to play at. They start off with high hopes but after a few holes there is a lot of complaining, self-doubt, and threatening to quit the game forever.

This could all have been avoided and they could have had much more fun had they moved up to a tee that was more comparable to their game.

We need to change our mindset and play the game where we can score and have fun. When I was attending the College of Golf, Dr. Wilson, PGA Master Professional, and Director of Golf would challenge us to play from the first set off tees. “If you can shoot par or better there, then move back one set until you shoot par or better from there, etc.” he would say to us.

The Tee It Forward program has a really good yardage recommendation based of the players average drive distance:

If you are finding that the game of golf is becoming frustrating, my challenge for you is this… with your next round of golf, move up one set of tees from where you normally play from. Move it forward and have fun. See you on the tee at Westchester Golf Course!

Continuing with our series from the The Itinerant Golfer’s quest to play all top 100 American golf courses, The Scratch Pad is glad to bring you a profile of the 15th in the list – Chicago Golf Club.

So why is the Chicago Golf Club one of the most important clubs in America you ask? Where shall we start? Lets see, for starters it was the first 18 hole golf course in North America and the club that established the modern Out of Bounds rule. Next, you have that the club was founded by the first US Amateur champion and de facto father of American golf, Mr. Charles Blair Macdonald. If any more evidence of the clubs importance were necessary, you can make note that Chicago Golf Club is one of the original five clubs that founded the USGA in 1894. If you’re looking for a place that has had a profound impact on golf in America, look no further than Wheaton, Illinois and the Chicago Golf Club.

And why has the golfing public at large never heard of this clearly significant and important club? Well, there are just 125 members and a great many of them play their primary golf at other clubs in the area. This results in very, very little play at Chicago Golf Club. The lack of play also means that guest invites are terribly rare, and truly something to be cherished by the lucky golfers who receive one. When I started the Top 100 quest back in 2007 I identified Chicago Golf Club as one of the five courses that may keep me from completing the quest. Everything I learned over the next three years confirmed that my fears were indeed well founded. In short, getting a chance to play Chicago Golf Club may be as likely as getting struck by lightning.

When the day arrived and I pulled into the driveway at Chicago Golf Club I was pretty excited. After parking my car I went into the locker room to change my shoes and have a look around. The first thing I noticed in the locker room were the cool subway tiled walls which were very popular in the late 1800s/early 1900s and the old metal lockers found at many of the great clubs from this era. I love a locker room with a vintage vibe so I had a good feeling about this place immediately. As would be expected the walls were adorned with golf memorabilia from the club’s history including one of the five original signed documents incorporating the USGA. It was pretty neat to see this important golf document and C.B. Macdonald’s bold signature in the flesh.

Before we tee off so to speak, I’ll give a very brief history of the course itself. Chicago Golf Club was founded in 1892 and at the time was located in Downers Grove, Illinois on Belmont Avenue. In early 1894 the club moved to the current location and C.B. Macdonald laid out the first 18 hole golf course in the United States. As years went by Macdonald felt that the technology of the game was advancing beyond the golf course he had created and it was necessary to redesign the course. He requested his protegee, Seth Raynor, do the work and in 1923 a new course was born. Raynor’s revisions and changes along with a handful of Macdonald’s original holes is the course that remains today.

As we prepared to start our game and discussed the tee selection there was not really much of a decision necessary as far as I was concerned. The back tees played 6,846 yards which on a par 70 course is a pretty serious test. We elected for the considerably more manageable 6,571 yard white tees.

The 1st hole is a 450 yard par 4 and is absolutely not your typical warm up starting hole. The golfer needs to be at ready from the start when teeing it up here. The photo below was taken from the tee and the best line of play is up the right side of the hole as the fairway falls off to the left. 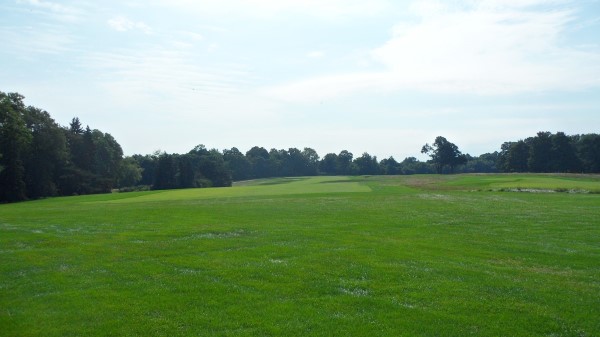 The photo below is where I hit my approach shot from (the rough of course). I was still a good 200 yards out. 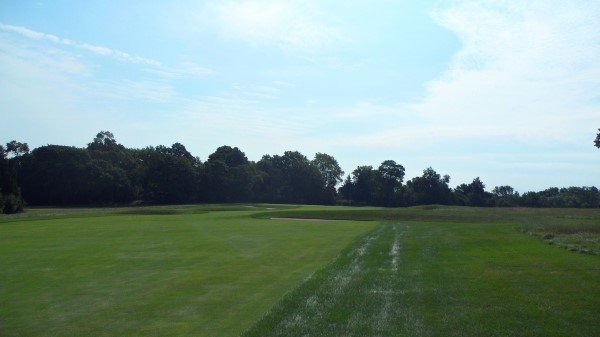 The 2nd hole, pictured below, is Raynor’s version of the Road Hole at St. Andrews. This one plays 440 yards from the white tees. Anything in the middle is just great here. The approach shot will be another long one. 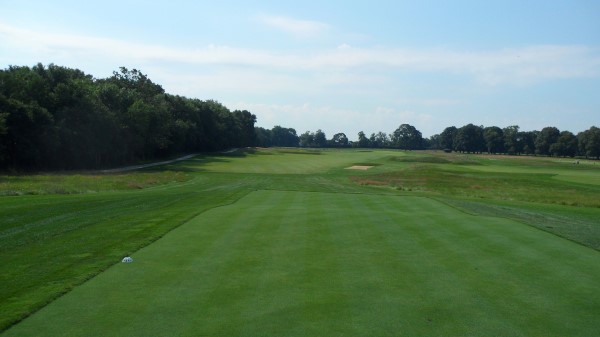 The photo below is of the approach shot on the 2nd hole. Note the Road Hole bunker at the front left.
END_OF_DOCUMENT_TOKEN_TO_BE_REPLACED