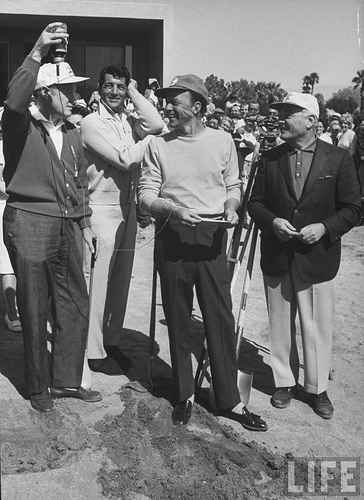 I view the Bob Hope Classic like I do IBM.  Back then, an entire golf tournament hosted, played, and produced by a celebrity was new. Parallels lie within IBM; a company that changed the way businesses do business. Both have been through their growth stages and now live in their more established, mature years. Companies like Google and players like Tiger have come on the scene and progressed both fields. Bob Hope was a lodestar of his time that took his extraordinary amount of popularity and created things bigger than himself that still live on.

So who was this man? A man that brought the game to millions, was the fourth in a group that consisted of  3 POTUS’s (one of them current at the time of play), and still has his name in the tournament title 7 years after he passed?

Below is Bob Hope on What’s My Line. He comes out immediately entertaining the crowd by putting Bing Crosby’s name on the chalk board. The way he works the crowd is brilliant.

The first 4 minutes of this video are somewhat less intereresting but it really picks up at the end when he talks about playing with different Presidents. He ends with a great story about JFK playing at Seminole.

Lastly, this is a good summary of some of the highlights at the Bob Hope. The first few seconds are hilarious with Jackie Gleason quipping back to Bob. Of course we can’t forget about the phenomenal play that has occurred over the years. I remember hanging on to every shot when Duval sank the final putt on Sunday for a 59.

It is tough to predict what the future has in store for The Bob Hope Classic, but in the mean time I’ll be sure to stop at St. Augustine for this exhibit: