We’re glad to welcome a new guest blogger at the Scratch Pad! The Itinerant Golfer profiles Steve’s quest to play all of the top 100 golf courses in America. You’ll get a chance to see a round in action, along with great photos of the holes on the course. We’re glad to have him with us, and will be sharing some of his best posts with you.

I wasn’t quite sure what to expect as I headed to Wisconsin to play Whistling Straits. Despite its high ranking of #22 on the Top 100 list, I wasn’t overly excited to play it. From what I could tell about the course from my research on the internet and from watching events played there on TV it was probably not going to be my kind of course. I was hoping to be surprised.

Once I got outside of Milwaukee I was in rural Wisconsin and was thankful for my trusty GPS unit. Eventually I saw the Whistling Straits sign and turned into the driveway. As I wound my way around I was very pleasantly surprised to see that there was no colossal clubhouse or hotel. Instead it was just a modest little clubhouse built to look like an Irish Cottage. Whistling Straits Golf Course was designed to have the feel of an authentic Irish golf club. I’m feeling better about this already. The photo below (which I did not take) shows a great view of the clubhouse. 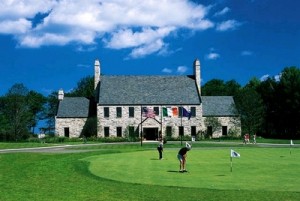 Herb Kohler of Kohler faucet fame built Whistling Straits. Kohler’s corporate HQ are just a driver and pitching wedge away from Whistling Straits. The American Club was actually not built by Herb Kohler, it was actually used by the Kohler Company to house the immigrant workers at the factory in the early years of the company, it was then renovated and turned into what is now a Five Diamond Resort. In addition to serving recreational golfers like me the course has also hosted events for both the PGA and USGA. The first major event to be held at the course was the PGA Championship in 2004, just 6 years after the course opened. The PGA has also already committed to bringing the event back in 2010 and 2015 as well as the Ryder Cup in 2020. The USGA used the course for the 2007 US Senior Open as well.

Today I was playing with Dave from L.A. and Mark from Madison who were friends and another single name Dave who was from Chicago. The scorecard conveniently recommended which tees to play from based on your handicap. The recommendation for me was the green tees which play just under 6500 yards. There were two other tees behind me at 6943 and the tips at 7362. That’s a lot of golf course.

The par 5 2nd hole pictured below gives the first real view of what I’d be seeing all day. The 2nd green is pretty indicative of the greens at Whistling Straits. While not as dramatic as some, the green is positioned in a way that clearly penalizes the players who miss on the lake side. 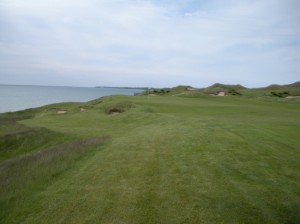 The photo below is the 3rd hole which is the first of 4 very difficult par 3 holes. Again note how the green hangs on the edge of the green. Going to the left you might get “lucky” and have a bunker catch the errant shot. If your not lucky a ball played to the left will result in having to re-tee and an almost certain double bogey.

Right around the 3rd or 4th hole is when the wind started to become a factor. Whistling Straits is designed to play like a traditional links style course and the wind coming off of Lake Michigan certainly did not disappoint. The holes along the waterline were sometimes playing as much as a 3 club wind while the holes not right on the lake were a little less, there were still wind calculations to be made in club selection.

The 5th hole is an interesting par 5 called Snake. It is a double dogleg and for me played as a true 3 shot hole. An interesting thing about this hole is that while it is one of the interior holes not directly on Lake Michigan it was still surrounded by water. The hole is enveloped by two smaller ponds/lakes that can come into play on all 3 shots. In the photo below you can see what happens to approach shots that don’t quite carry the pond that hugs the side of the green. 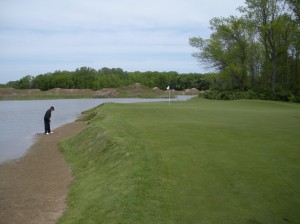 The 6th hole is another shortish par 4. The photo below is taken from the tee. As you can see one of the the major factors players have to overcome at Whistling Straits are the many visually intimidating tee shots. In reality they are not so bad, but standing on the tee with the wind blowing hard they can certainly make the knees knock a little bit. 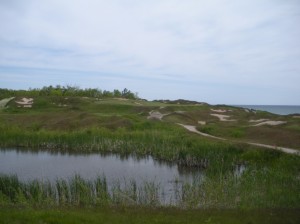 They have added an interesting new greenside bunker to the hole. The bunker as you can see in the photo below cuts a big chunk out of the green which can make an errant approach shot that lands on the wrong part of the green an impossible two putt. The bunker is also very deep and with steep grass walls so getting out of it could pose a real problem for those unlucky enough to land there. 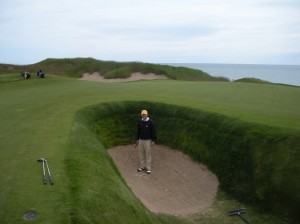 The 8th hole was long par 4 with dogleg right which made the approach shot play dead into the wind coming off Lake Michigan. The photo below was taken from the tournament tees that play 462 yards. This is a blind tee shot to the fairway with a HUGE forced carry. Not an easy hole for the pros. 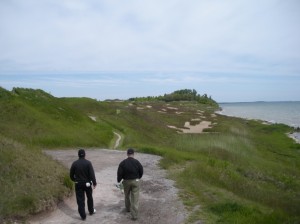 Fortunately the tees I was playing took the blindness out of the shot and most of the forced carry as well. It was still 413 yards, but quite a bit more manageable. After a great drive, I still had to hit a knee knocking 210 yard shot into the green which of course was hanging on the edge of land with disaster for balls going long or right. The photo below was taken from the fairway prior to the dogleg. 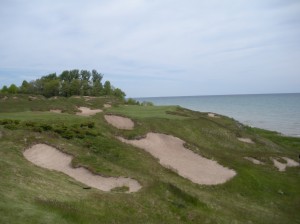 The 9th hole is a mid length par 4 that plays down hill. A good tee shot can leave under 100 yards into the green. With the clubhouse in the background and the rolling hills this hole certainly achieves the desired Irish effect Herb Kohler was going for. 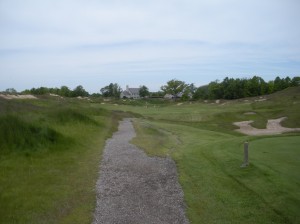 The 10th hole is a great dogleg left par 4. Though the yardage is not terribly long the uphill adds a great deal of length to the hole . . . not to mention the wind. The best line is right over or the the left of the pot bunker in the middle of the photo below. Note the white specs off to the left of the photo sprinkled amongst the bunkers. 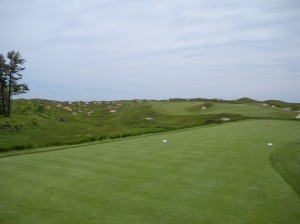 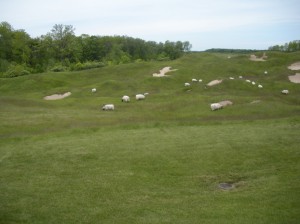 The 12th hole is a fantastic par 3. It doesn’t play real long to the middle of the green, but the green is very large. The scorecard says 120 to the middle from the tees I played, but I had to hit every bit of my 5 iron which is my 180 yard club. If you look in the photo below the players on the green are at the very back. The front of the green stretches almost to the left edge of the photo. Its a HUGE green. The hole was cut in the back on this day and in that part of the green there is barely enough room for 4 players and 2 caddies. 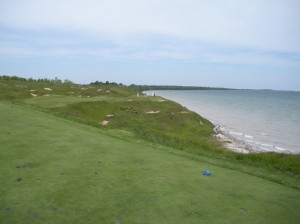 The 17th hole pictured below is another tough par 3. All the par 3s at Whistling Straits seem to hang on the edge of the lake. This one is longer but was playing with the wind. The scorecard said 190 from my tees and I hit my 160 yard club and ended up 35 feet past the hole. 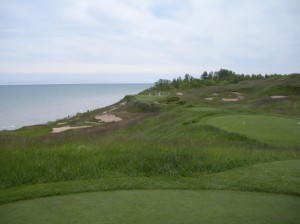 Here is a view of the 17th green as you walk up to it. Note the bunker on the right. I’m not real sure why Pete Dye put this there. It is completely manufactured and looks a little ridiculous. 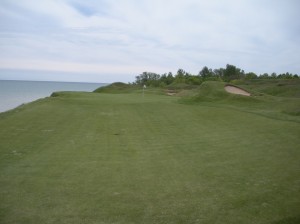 Below is a photo from the 18th tee. I wasn’t real sure of how to play this hole. I had seen it from the club house earlier in the day and it is a split fairway. My caddie was telling me to hit the ball in one spot and I thought he was telling me another. Now that I’ve walked the hole I understand it much better. Fortunately my lack of knowledge didn’t hurt me and I managed a good drive. 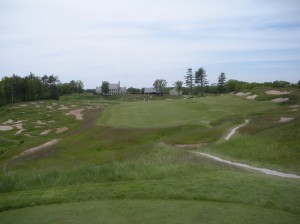 The photo below is where I hit my approach shot from. The shot is visually intimidating but it was only 160 yards. 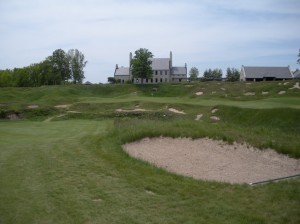 I had fun playing Whistling Straits – I found it to be a novel course and relatively fun to play one time, but the price is exhorbinantly high for what I felt was a mediocre course. The vibe of the place is great with the small clubhouse, sheep and wind. It really does feel like an Irish course. When I played it they were coming out of a particularly long winter and the conditioning of the course was terrible which added even more to the Irish feel! There were some fun holes, but I’m not convinced that the course warrants such a high ranking. I’m also a little surprised that the course hosts a major championship event (PGA 2004, 2010, 2015) as well as other important championships (2007 US Senior Open and 2020 Ryder Cup). It just seems a little too tricked up and gimicky to be a major championship course to me.