I’m convinced there are not enough golf books in this world. Millions of fantastic golf stories are untold because they were never journaled. Fortunately for the golf world, Tripp Bowden chronicled his experience as one of the first white caddies at Augusta National Golf Club. His book, Freddie and Me, takes the reader inside the grounds of Augusta National Golf Club and tells stories from the club with Freddie Bennett — the revered caddie master of 30+ years — as the focal point. 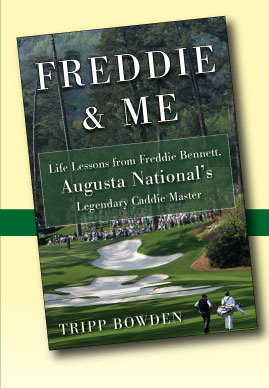 Freddie and Me touched on many of life’s greater observations. Tripp was kind enough to answer my follow up questions about Freddie, the course, and golf.

There are so many stories in Freddie and Me that epitomize Southern wit, charm, and humor — metaphors are a significant portion of that humor. What are the top three metaphors or Freddy-isms every golfer should know, but doesn’t.

Top 3 Freddie-isms/metaphors. Hmmm. Well one of the classics is: “You don’t read Augusta’s greens, man. You remember them.” And that was so true. The greens were so consistent day to day, month to month, year to year, that they did the same damn thing every time. It was rare when I wouldn’t smile when a guest or member said, “give me a read and I was thinking—read my ass. I am giving you a memory.” I got to where I could “read” the shit out of them cause they did the same thing every time. It all came down to how hard the player was going to hit the putt—in the end I always knew which way the putt was going to break. Which is something very difficult to do at Augusta—especially if you try to “read” the putt.

Don’t ever tell anyone to lay up on the chance of a lifetime is another great one. This is one he told me when he gave me the crash course on how to caddy at Augusta. It was a great point made—most guests know they won’t be coming back, so if you got a guy standing on 15 with a 3 wood on his mind put it in his hand. He also said: You can lay up when you are dead. I love that one too! And how true that is. I think Freddie believed like I believed: that life is designed to pass you by if you just sit back and let it. So get your ass out there and let the fur fly, baby!

My all time favorite may be the one he told me when he was trying to get the caddies to shut up with all the noise in the caddy house after a long day for him. Pretty much told em that if they didn’t shut the hell up he wasn’t going to pay em shit for their work that day. When he is telling me the story he looks at me, smiles and says: Mannnn that caddy house got some kinda silent. So quiet you could hear a rat pissing on cotton!

So quiet you could hear a rat pissing on cotton! Now that is an analogy for the ages!

Freddie seemed to be the father, leader, banker, dictator, bondsmen – just to name a few, of the caddie society at Augusta National Golf Club. One of the most impressive talents he had was his ability to manage the members as well as the caddies. Freddie’s versatility is remarkable and inspiring. What are the qualities and characteristics that made him so respected from both ends of society; the crack-pipe smoking, murderer caddie to the wealthiest and most powerful men in the world?

I could write a book on that attribute alone. In a nutshell, I think it was because of a few things. The first being he treated everybody the same, whether you were a caddy who had won the Masters, or just your first time out, or the chairman of Augusta National or a brand new member. He was also so damn smart—and everyone who spent time with him knew that. You could not fool him for nothing, nor play him for a fool. I think the members deep down knew that if Freddie would have grown up in a different time he would not only be a member of Augusta—if he accepted the offer—but he could run the joint. He used to tell my dad: “I’m the strongest, the smartest, the biggest and the blackest!” When Pop asked how he became caddy master at Augusta. My dad, who speaks Greek, Latin, is one of the most highly touted gastrointestinal surgeons in the world, plays 11 instruments, paints, draws, is also an Episcopal priest with his own church, considers Freddie Bennett the smartest man he has ever known. By far.

I guess that says it all…

Freddie was also very fair, caring, honest, and at the same would work the system if he thought it would help a caddy out. Was he a Christ figure who dropped the F bomb when needed? No doubt in my mind.

It seemed like there was an inherent belief that the black caddies knew Augusta National Golf Club better than anyone — including any members or pros. It was almost as if you’re white, you only play the course, but you don’t actually know it — you would need the expertise of a black caddy to truly understand its entire offering. You seemed to be the the first white person to break the belief barrier that you (White Boy) had almost as good of an understanding of the course as the most respected black caddies. Can you elaborate on this divide?

Interesting question, as I never thought black and white when I was out there. Freddie was color blind in that respect. But certainly when, at least in the early days, a guest or member saw my white ass on their bag on the first tee they were thinking: “Damn, I got me one shitty ass caddy. A frickin’ white boy.” First time I played Augusta years after my caddy days and there was a white boy on my bag I thought the same damn thing. And I was right. He sucked.  Difference was I did not, thanks to Freddie. He put me out with the best caddies at Augusta—and I learned every single thing I could—soaked it up like a sponge in a white jumpsuit! The majority of the caddies out there today are white, thanks to Caddy Master Incorporated, which took over while Freddie was still there and in my eyes took away his magic. I will bet you a dollar to a doughnut that they, as a group, can’t hold so much as the wick of the proverbial candle in comparison to the old Augusta caddies. I know for a fact they can’t.

Storytelling is a very big asset to any golfer. Freddie and Me is almost a contemporary golf version of Aesop’s Fables. From your years of telling stories to members, writing novels, and sharing metaphors, how can the average golf enthusiast improve their storytelling ability in order to have a more memorable and enjoyable golf experience?

Whoa—another great, and rather tripping, question. Hmmm. Love your comparison to Aesop’s Fables..never thought of it like that, but Freddie certainly had some Aesop in him. If there is one thing I could tell every golf enthusiast who wants to have just what you describe it would be this: Pay attention, and lock in on—to everything. The starter on the first tee, the assistant pro who either welcomes you or is a jack ass, the price of beer at the halfway house, where are the ball washers—very few are on the back tees btw, the condition of the greens, are there benches on the tee box, is the parking lot convenient, is there a bag drop, most importantly is there a shoe shine guy, can you bring in your own beer, does the cart boy clean your clubs before you tee off. After? Do you feel welcome if you are a guest? Did it rain. Did the score matter most or the experience?

It should always be the experience…

Storytelling, at least good storytelling, is always from the heart. You don’t make that feeling up—in fact you can’t. So—soak it all in, and when you tell the story of your experience at course xyz, squeeze it out pdq if you are a northerner, or slow as cream rising on buttermilk if you are a Southerner.