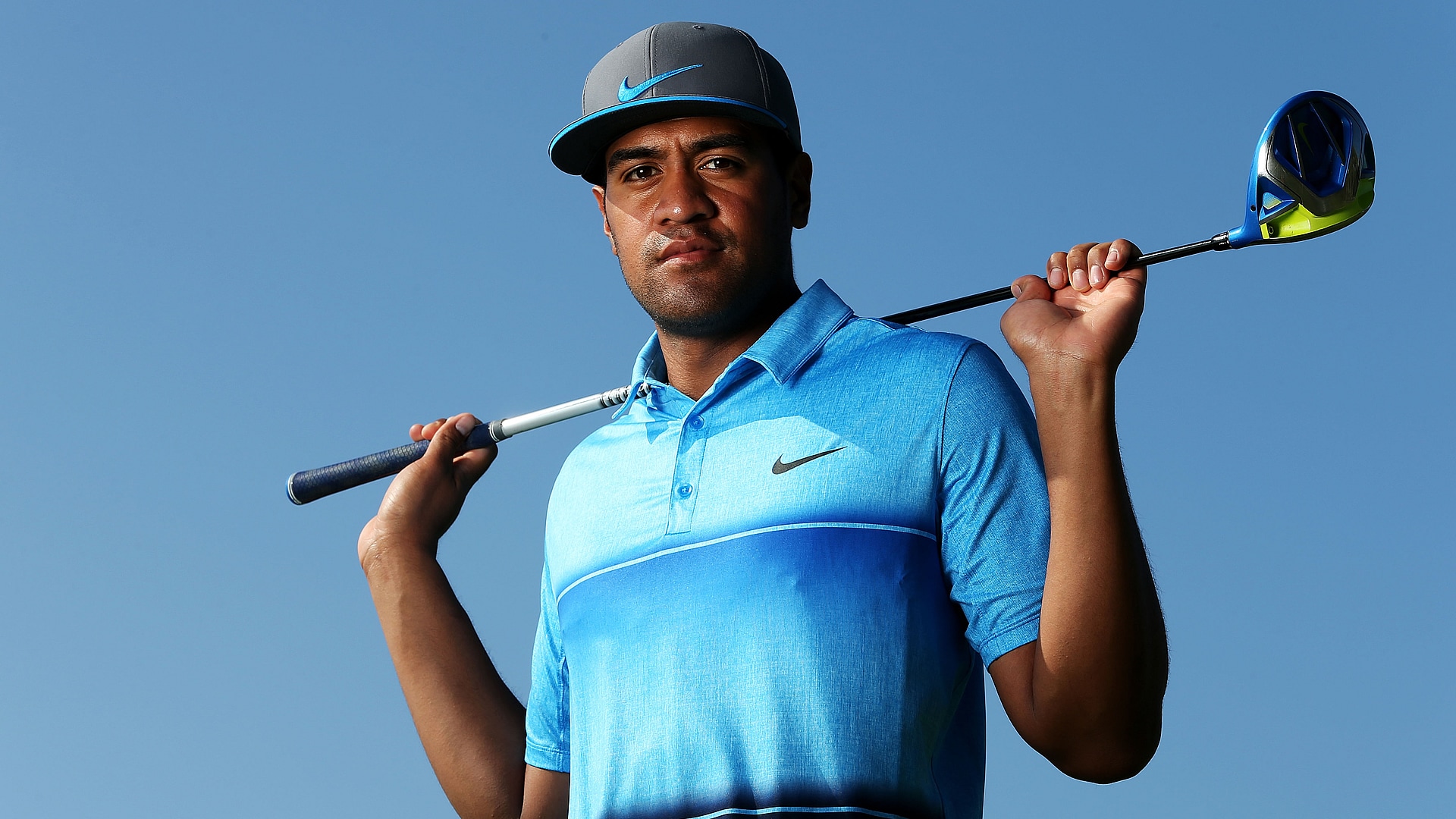 DUBLIN, OH–Despite windy conditions Tony Finau  continued to putt with remarkable consistency to score a smooth 66 good for the lead at (-6).  The former “The Big Break” contestent  has been a fixture amongst tour favorites in recent months.  From his “interesting” relationship with Tiger Woods, to his awkward antics on the greens, Tony even has “Six Degrees of Separation” to the NBA and all this while he’s begun to discreetly (or not so discreetly) start floating around the rarefied PGA Tour air around him.  Finau has always been an enigma amongst his peers.  The former college basketball recruit out of Utah, who also happens to be second cousin to former Duke standout and NBA basketball player Jabari Parker, decided to forego that sport to focus on the game of golf at the age of 17.  Tony got his first pro exemption at the Greater Milwaukee Open in 2007 and continued to grind through mini tours, and yes, as well as a stint on reality television.  He joined the PGA Tour Canada in 2013 and officially worked his way onto the PGA Tour in 2016.  Finau is more workman like at his craft than a standout in any particular category.  Although he has been hot off the greens of late, his overall putting avg. stands at 1.594, good for a mediocre (66th) on tour and his One-Putt Percentage of 39.98% is a meager (85th).  What he generally lacks in putting, he tries to make up for with a solid driving Distance average of 305.9 yards (26th) and a much improved tee-to-green avg. of 1.278 (10th).  When Finau manages his game around the greens, he fairs very well in scoring, boasting a 4.26 Birdie avg. (20th) and 69.43 (Actual) Scoring avg, also (20th).  The knock on Finau is that he has so much room to grow.  Many on tour suggest that if only he would fully apply himself, the sky would show him no limits.  Never shying away from the spotlight, he has demonstrated tremendous flashes in Major tournaments, most recently at last years Masters, finishing 5th, which he followed up with a 3rd place finish at the Open Championship later that season.  After his first round performance at Muirfield, it appears that this late bloomer is starting to find his groove.

Tony steps it up when the lights are brightest

TONY AND THE TIGER

The Finau/Woods relationship can probably be best described as awkward…As Finau was surging at last years Masters he found himself paired with his idol on Day 4.  After saying “good luck” on the first hole no words were exchanged until hole 7.  In an attempt to break the ice, Finau said, “Hey Tiger. How’s the family? How’s the kids?”  Woods, known for his laser-like focus,  replied with a frosty “they’re good” and nothing more.  Finau recalled that congratulating Woods at 18 was his last interaction with him.

Also: here’s Finau recounting a moment from the 2018 Memorial:

“I putted for 20 minutes. I saw him walking toward the (fans), so I sneaked by him. No one was paying attention to me, of course, it was Tiger. As I’m walking up the stairs, he looks up at me and shakes his head.

I’m eating lunch, he comes in and looks at me and says, “You’re an (expletive)” (with a smile). I stuck him with all his fans and didn’t help him one bit to sign. He didn’t like that a lot, but I was ready to eat and knew they were there for him. It’s not that I don’t like signing, I was just very hungry.”

Good grief, Tony Finau wrecked his ankle celebrating a hole in one pic.twitter.com/8o7JxVi3xQ

Finau contorts his ankle after sinking a hole in one at the Masters Par 3 contest in 2018.  He managed to pop it back in in real time.  Despite the gruesome injury, Finau played all week and finished tied for 10th at The Masters. 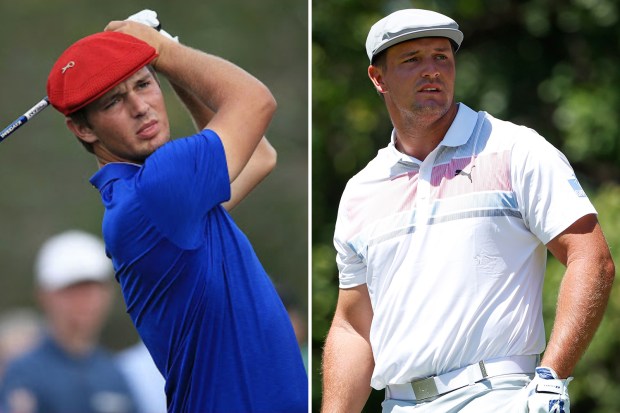 DETROIT GOLF CLUB–Emerging talent Bryson DeChambeau (26) scorched through The Rocket Mortgage Classic, dusting off a Sunday -7 to compile his -23 sum total for the week.  A performance of that caliber made it  impossible for us at Outdrive Me not to take notice!  His driving has catapulted him as The Top Bomber on the PGA Tour crushing an excess of 323 yards per attempt, pacing his contemporaries while amassing a physique atypical to the sports general requirements.  DeChambeau, already affectionately known as “The Mad Scientist” says he wants to be “The House.”  As in a casino, because “The House Always Wins.”  A modern day quip from a millennial Tour athlete who is willing to test, tinker, and press the limitations of his own body with a determination to power his way into the elite of the sport.  Now: A “Power House,” Bryson has developed his body into the composite of a professional wrestler.  He has been devastating tees with impunity while displaying a timely putting game. His short iron game is still in question, but the hottest topic on the Tour remains DeChambeau’s recent emergence which has been primarily fueled by his increased mass and strength.  His peers discuss his 40 pounds of muscle gained during this past offseason with variant degrees of intrigue.  He is currently swinging his driver just shy of 140mph and the ball leaves his clubface at more than 200mph!  Can this ultra concerted effort of power translate with consistency in the Majors?  Is this a game theory to be championed by those in the PGA meandering in the low equity of sub 300 yard drives?  Could mass physical training be a substitute for the finesse and subtleties that we typically associate with the game of golf?

What’s undeniable is that pulverizing the ball off the tee is not only exciting to watch, but is also the most marketable portion of the game.  As fans, we fawn at the majesty of  a deep arching drive that screams across the sky and lands on the softest bed of grass at an apex length.  For the sake of a sport that is now thrusted in the spotlight in a post-Covid world as one of our few options for distraction, the California native and Texas bred pro maybe ready for his close-up.  With a more keen focus on his game, could we be in the midst of witnessing a total fluke, the second coming of John Daly, or golf’s Next Big Star?!  Pretty exciting stuff to look forward to as we resurface from the catacombs of sports hibernation.   A younger more risk taking breed of golfer primed to blend muscle with science and technology in this new era of the PGA.  Vegas odds makers have taken notice: DeChambeau (10-1) leap frogged Rory Mcllroy (12-1) as The Masters favorite following this weekend’s victory at DGC, which will be showcased this fall at Augusta National Golf Club in November after having been postponed due to the pandemic.  This definitely bears watching.

* There will be no fans in attendance due to Covid-19

OUR NEW NORMAL: GETTING OUT OF THE ROUGH

Due to the increased spread of the COVID-19 pandemic,  We are going to take a focus on how the various Public, Federal, and Private golf courses are addressing the reality of the Novel Coronavirus.  We hope to give additional insight to these ongoing changes to our Community at  MyScorecard and Outdrive Me so to better avoid the spread of the infectious respiratory disease.

Please note: During this current phase of the pandemic, Public and Federal courses do not allow for any groups larger than a Foursome.

Below are links that identify the current trends and developments in the United States: 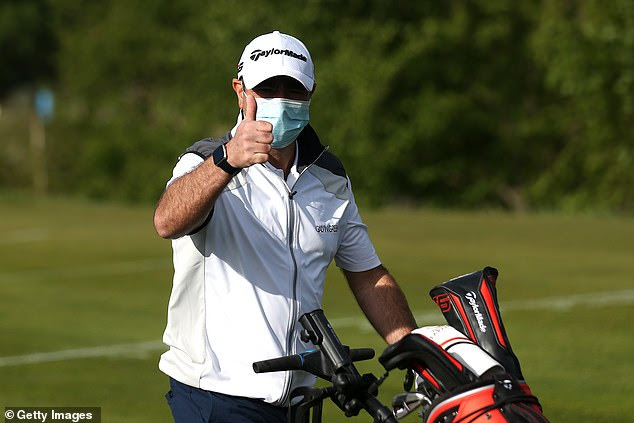 Of the 4 Greater Washington Metropolitan Public and Federally owned golf courses surveyed, a unanimous refrain from their staffs was that guests are not respecting the CDC guidelines these establishments are forced to adhere by.  The most broken rule is that of wearing a mask.  Most often the attendant or employee of the golf course will be too timid to enforce the rule or guests will just blatantly disregard the requirement entirely.  CDC data has revealed that a primary route of transmission of the disease is likely via small droplets that are ejected when speaking, coughing or sneezing.  Masks are viewed as effective as a “source control” because they can prevent larger expelled droplets from evaporating into smaller droplets that can travel farther.  Please do your part as a member of your community and READ and FOLLOW the guidelines, restrictions, and regulations that are designed for your safety provided by your attended golf course.

So You Wanna Give Your Homie/Homegirl Dabs…

We’ve heard it ad nauseam: *6 FEET APART.  That’s the spacing and distancing required by each individual to help mitigate the spread of COVID-19.   However, recent studies have suggested that 20 feet of distance and a mask is the most sure fire way to stay safe. That’s obviously ridiculous when golfing with a friend or someone that you are comfortable and familiar with.  I get it.  How difficult is it NOT to acknowledge a killer Drive, sweet Approach shot, or beautiful Layup to stave off a potential disaster?  You know the feeling!!!  Similar to the time you nailed a scientific Fade that let you off the hook from a bad Shank…You know the immediate reaction is that your Homie/Homegirl will want to give you dabs of some sort.  Unfortunately, a handshake, high five, or a hug is not advisable during this pandemic.  The best suggested practice when combating COVID-19 while golfing is to avoid body contact and to steer clear of the exchange of equipment amongst partners or groupings.  Hands touch too many surfaces and can quickly pickup viruses.  Once contaminated, hands can transfer the virus to your face, from where the virus can move inside of your body, making you feel unwell.  Probably best to acknowledge a certain feat with  a fist bump or a tip of the cap.

Although I highly recommend that you support all local small businesses and establishments during this crucial time,  the restaurants affiliated with Public and Federally owned golf courses are mostly limited to a reduced Carry-Out Menu.  At the risk of an 1hr 1/2 or 2 plus hour drive, it would probably be wise to pack a sandwich or a snack just in case their offerings aren’t to your liking due to the lack of variety .  Golfing 9 between Four participants who are primarily chopping it up could take way longer than expected.  This is one way to ensure that you’ll have enough sustenance to carry through the day.

Well, looks like you’re successful at what you do! If you’re reading this you have the luxury of golfing at a private estate or you have a friend in a very high place.  At this point in life, you may feel invincible.  Just remember:  COVID-19 does not distinguish between Prince or Pauper.  Please adhere to the suggestions listed above to ensure safety for yourself and others.

In addition: The PGA continues to monitor this situation closely.  We will keep our Community posted on all updates.