Produced by Aford Awards a UK manufacturer of golf trophies as well as other glass sports trophies.

Sometimes we hear about offers that would be of interest to our member base. Here is one that was brought to us by a new golf startup. We thought some of our members that play often and love equipment might be interested…

GolfRedefined.com, a new golfing membership site is looking for up to 50 testers of its new service. Members can choose the driver of their choice, play with it for as long as they want, send it back and then receive their next choice.

Membership means you can always play with the driver you want, swap it for another and repeat until you find the one that suits your game best. No purchase, no restrictions. Simple.

Interested golfers should email golfredefined@gmail.com with “MyScoreCard.com” in the subject line for a discount code and further instructions.

MyScorecard receives no payment if you sign up – we just thought a few of you might have some interest and wanted to share the discount. Happy trialing!

The USGA just published a breakdown of handicaps for all Male US golfers.

We thought it would be fun to compare against our own member base, and so published both in graphical format below: 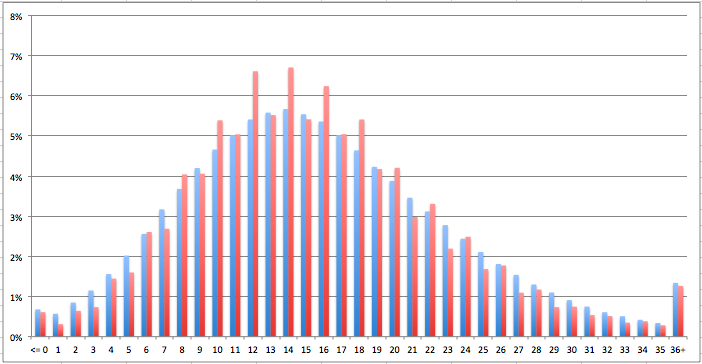 The graph shows the % of golfers that fall within each handicap number on an average course.* For example, about 2.5% of all golfers are ~24 handicaps. On average, golfers than maintain handicaps fall within the 13-14 range.

So now you know what the say when someone asks you “What is the average handicap?”. But note that this information is only for golfers that maintain a handicap. Many more do not, and so the average score for all golfers is about 100 (which might correspond closer to a 25 handicap).

The blue bars on the graph represent the USGA information, while the red bars represent the breakdown of handicaps on MyScorecard. Pretty close! We were hoping to tell you that our members are significantly better than the overall distribution, but on the flip side it’s nice to see that golfers of every skill level enjoying MyScorecard.com

Any questions, let us know.

*For golfers that maintain handicaps. Indexes are rounded, since handicaps are expressed to one decimal place. Or you can consider it as the course handicap on an average course (with slope of 113).

In this video parody, Ben Crane (who has taken lots of flak from fellow players and fans for his excruciatingly slow play) resolves to improve his speed. What’s your new year’s resolution?

The chart below shows the cycles of greatness on the PGA tour since its inception in 1916 through 2004. The chart includes 57 players that have won at least 15 events on tour, as well as the most dominant players, whose rise and fall are graphed out over time. Click on the link to be taken to a page where you can zoom in and view the details of the chart (and can also buy a print, if you would like).

The below chart, appearing in a recent GolfWorld article, looks at the number of “long bombs” by professional golfers vs. their height. One conclusion that can be drawn is the lack of correlation between height and number of super-long drives. The other is that Bubba Watson really stands out from the pack, with 50% more 350+ yard drives than his nearest competitor.