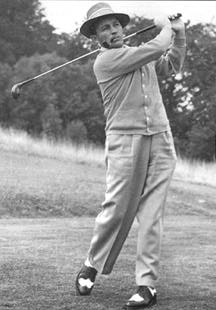 Crosby, who was a five time champion at Lakeside himself, was amused when Montague suggested this off the wall bet. Bing and Montague agreed on a wager of $5 a hole, and Bing was confident that he would able to beat Montague’s equipment of junk with his seven-iron. The match ended when Montague hit the ball in with his rake for a birdie three. END_OF_DOCUMENT_TOKEN_TO_BE_REPLACED