Someone once asked "Are you allowed a lift if your ball ends up on a dirt path?"

Are you? What if the path just barely shows through the grass? What if it is full of holes and rocks?

Such decisions need to be made on a course by course basis, thus the need for local rules. Local rules, posted on the back of the scorecard or in the pro shop, deal with several areas:

The local rules committee can specify relief if roads and paths that do not have asphalt, gravel, or other artificial surfaces, unfairly affect play. In addition, any construction can be declared an obstruction (or not), allowing golfers the appropriate relief.

Under conditions of extreme mud or wetness, a local rule may be established that would allow players to remove an embedded ball, or even lift and clean their ball, anywhere through the green (on all areas of the course except the tee, green, or in a hazard). 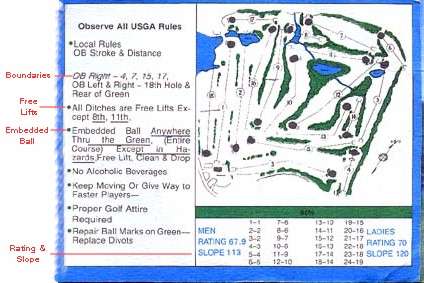 A local rules committee may declare any day to be Winter Rules or Preferred Lies That comes with a strong note of caution, as the USGA does not like the idea of preferred lies. Not only do preferred lies go against the fundamental principle of 'playing the ball where it lies', they tend to lower scores and handicaps (penalizing players when they play at a course with no preferred lies) and lead to more damage on the best parts of the course.

To be fair, in some cases preferred lies do promote fair play.But when people do play with preferred lies, do they even know what the rule is? Are golfers allowed to move their ball 2 rolls, 6 inches or 1 club length? The answer is that the rule is set on a local level, and will vary from club to club. If preferred lies are in effect, make sure you check before you play.

Local rules also deal with several other areas, including special drop areas temporary power lines, environmentally sensitive areas, and practice between holes. But the most important thing to remember is to simply review the local rules in effect before you play. Doing so will not only lessen your chances of an unexpected OB, but may just allow you to take relief when your ball lands on that dusty road that crosses the 14th.

For More Information
For further details on local rules, take a look at Appendix I in the Official Rules of Golf.
The above article is meant to help clarify some of the basics above the rules of golf. If the above comes into conflict with local rules or the USGA, the latter two should always be taken as correct.