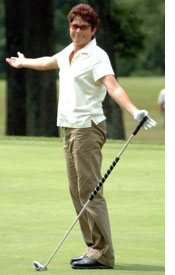 While playing on the Legends Tour I've had the opportunity to talk with some of the best players in this game. I remember one such occasion in 2002. I was riding in a shuttle to the golf course with Kathy Whitworth. I had been playing well on the newly formed Legends Tour. I had a couple of top ten finishes under my belt, but couldn't get that "elusive win." Kathy Whitworth won 88 times on the LPGA Tour. I thought I'd pick her brain. So I asked Kathy what she did to make putts inside of five feet on a routine basis.

Consistently making your shorter putts can really help your score. She replied, "I play most of those straight in the hole with good speed." It seems too simple to be true but I used that small piece of advice and went on to win an event that year.

When lining up those 3 to 5 foot putts that don't have an obvious break, pick a spot a few inches in front of the ball and play it straight into the back of the hole.

If you tend to look up during the stroke, place a dime under the ball during practice and look for that dime as the ball leaves. That will keep your head down and your mind active.

One of the most important aspects of the game is finishing out short putts. After you hit a great bunker shot or chip, making that putt gives you great confidence in the rest of your game. It helps you SCORE!

Lag putting is another story but the main goal is to get it near the hole. Speed is very important and a long putt needs more of a backstroke. You also have to play more break in the line than the short ones. You want to pour it into the hole like a pitcher of milk. Let it flow down the slope to the hole. Then walk up confidently and hit that little one straight to the back of the hole.

Maybe you can win 88 too... Good luck and many birdies to you!

Lori West
Lori West is a two time winner on The Legends Tour with victories at the 2002 Hy-Vee Classic and the 2003 Buehler Classic. Her win at the Hy-Vee Classic was her first professional victory.

Lori began playing golf at age 22 after attending Colorado University on a track and field scholarship. She joined the LPGA Tour in 1984 and had 5 top ten finishes, including 2nd place at the 1992 Lady Keystone Open. Lori played the LPGA Tour for over 15 years before joining the Legends Tour.