As you enter your most recent round into your Scorecard, we have asked that you enter two additional numbers: The slope and rating of the course. Why do these numbers matter and what do they mean?

The slope and rating numbers are used to measure a golf course's level of difficulty. The numbers allow golfers to compare scores between different courses they have played, as well as scores on courses they may have never seen. 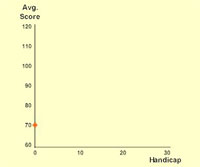 Typical ratings run between 65 and 75. In the graph to the left (which looks at the average score versus course difficulty), a course with a rating of 70 would be represented by the red diamond - located at a handicap of 0 and score of 70.

However, using only the rating as a measure of difficulty, the same five stroke difference would appear in the calculation for a bogey player - a golfer who on average shoots 18-20 strokes over par. But, in fact, courses that have the same rating (difficulty for scratch golfers) do not play the same for bogey golfers!

We'll use two courses to prove the point: The first, a longer open course, and the second a wooded course that is slightly tighter. A scratch golfer who hits the ball down the fairway each time should not have too much difficulty with either - in fact, they may find the longer course slightly more difficult. However, a wooded course might wreck havoc on the round of a less accurate bogey golfer. We'll call this golfer Izzie. 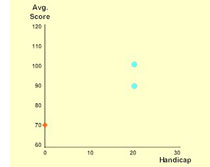 Let's assume, for simplicity, that both courses discussed above have ratings of 70. This would indicate that golfers should shoot the same score on both courses. However, were Izzie to play the two courses he or she might end up in the trees a few times and shoot average scores differing by more than 6 strokes, as shown on the right by the blue circles:

So, how do you correct for a difference is not taken into account by a system that exclusively relies on ratings. Connect the dots!

As in geometry, having a point and slope allows us to calculate all the points along each line, identifying the course difficulty for all skill levels. Now you know where the term 'slope' comes from. The slope of a harder course will be represented by a steeper line, while the slope of an easier course will be more gradual. 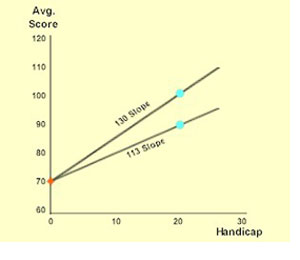 The slope of an 'average' course was determined to be 113. The hardest is about 155, and the lowest is around 55. Including the slope allows weaker players to receive more strokes on more difficult courses than stronger players, precisely because the course is harder for them.

But does slope matter if you are not playing against another golfer? Let's return to our friend Izzie to find out.

Izzie, who has a handicap index of twenty, still likes to play on the courses we described above. Under the old rating system, the increased difficulty of the wooded course would not be taken into account. The higher scores would be seen to be caused by worse play, inaccurately raising Izzie's handicap when in fact he or she may have actually played better (though he shot a higher score on a more difficult course).

Using the slope corrects for this and produces a better picture of course difficulty. The result is a more accurate calculation of the handicap.

The slope has been a great innovation to the handicap system. It allows golfers to play different courses and still enjoy a fair match, regardless of their skill level. Next time you play a round, remember to enter both the course slope and rating numbers for the best possible computation of your handicap.