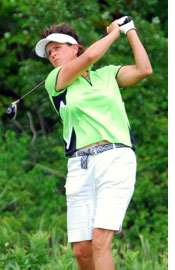 The Simple Bump and Run shot is your primary Go-To chip shot around the green. I like to get the ball running on the ground as soon as possible in order to avoid mistakes with undulations, breaks and speed. Unless you have several feet of fringe or a bunker in front of you, a 9, 8 or even a 7 iron is the perfect club to use for this shot.

For best results, I normally try to take most of the guess work out of this shot by eliminating any wrist action thru impact. Flimsy wrists can create too many problems with timing and mis-hits, causing inconsistent results. For the bump and run chip shot, the position you start your hands and wrists at address will remain the same through out the entire motion of this shot. Let the club do the work for you and the loft and ball position will create the results you are looking for.

Rosie Jones
Rosie is one of the most popular LPGA golfers of all time. Rosie began her golf career at the age of 11 and had an impressive amateur record collecting 3 New Mexico Junior Amateur titles as well as the New Mexico State Championship. In 1982, Rosie joined the LPGA and claimed her first victory in 1987 at the Rail Charity Golf Classic. She won a total of 13 LPGA titles and earned over $8 million in prize money. Rosie competed on 7 U.S. Solheim Cup teams. Recently, Rosie has continued her winning ways on the Legends Tour with 2 victories, including the 2007 Legends Tour Open Championship. Rosie was a member of the 2006, 2007 and 2008 U.S. Handa Cup team. Rosie can also be seen and heard on The Golf Channel as a golf analyst.