Blue, red, white, yellow - you would think the United Nations was out on the golf course.

But take note, the color of the flagstick conveys important information to the golfer. On many courses these colors have meanings. A red flag may signal a hole placement towards the front of the green. For a golfer who switches clubs every ten yards, such a situation might require a more lofted club for an approach shot. 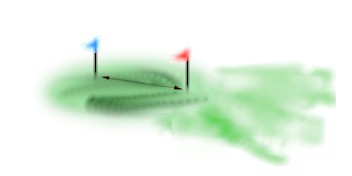 Similarly, a blue or yellow flag may indicate a hole pushed towards the back of the green. (Of course, the flag colors that are used will vary depending on where you play).

The distance between a pin placement at the front of the green versus one at the back can be ten or even twenty yards, transforming your next stroke from a putt of five feet into one of sixty.


One important rule in dealing with the flagstick: A ball that begins on the green cannot strike the flagstick. To comply with this rule, any golfer can have the flag removed, tended (have someone stand next to the flagstick, holding it, ready to remove it as the ball gets near), or held up to show where the hole is. But this request must be made before you make your stroke.

If the above rule is broken, as in the following three cases, you will receive a two stroke penalty (or lose the hole if you are playing a match game):

On a final note, if the ball ends up resting against the stick halfway into the hole, you are then allowed to remove the flag. If the ball falls into the hole, it counts as if you had holed out. But if the ball pops out, you need to place it on the lip right outside the hole and tap it in, for another stroke. One of the ironies of golf is that a drive of two hundred and fifty yards, and a putt of two hundred and fifty millimeters are indistinguishable on the scorecard.

For More Information
For further details on the flagsgtick, take a look at Rule 17 in the Official Rules of Golf.
The above article is meant to help clarify some of the basics above the rules of golf. If the above comes into conflict with local rules or the USGA, the latter two should always be taken as correct.