One of the less well known but useful rules in golf is the rule of the unplayable ball. This rule gives a player the option, at any time other than in a water hazard, to declare their ball unplayable

You are the only person who can say it is unplayable.

If you choose to invoke this rule, you will receive a penalty stroke, but then you have the following options: Why is this a good rule? A few examples illustrate the point:

One morning of your vacation you end up playing with some friends on the hotel's course, which is tight and wooded. On one of the back nine holes, your nerves finally get to you, your grip says 'adios amigo' and you shank your ball (hit it very badly) deep into the woods. Trudging through the evergreens, you find your ball next to a log behind several trees.

It would take you at least 5 shots to get it back onto the fairway. Instead, you declare your ball unplayable, take a penalty stroke, and bring it back to the spot on the fairway from where you shanked it. You have just added two strokes to your score from the last time the ball was on this spot, but you once again have a clear shot to the green.

In our second example, your approach shot fell just short into the sand trap guarding the front. But as you walk up the fairway, you notice that your ball has become wedged into the lip of the bunker. You can hit the ball, but there's a good chance that it will burrow further into the lip. If you're lucky it may come out and trickle down into the bunker. Is your only option to pray and swing? No, you may declare your ball unplayable.

Draw a line between the ball and the hole. Since it is a big bunker, you can step back a few paces along an extension of that line. You must remain in the bunker to drop your new ball, but you have now ensured that your ball has a good lie, ready to get up and down on your next two shots.

The final example may seem a bit odd, but it illustrates the point well. Your ball is on the green, three feet above the hole. It would be an easy putt except for the treacherous downhill lie. You line up to putt, but hit the ball way too hard, and sadly watch it roll all the way off the green - the ball finally comes to a stop in the bunker at the front of the green. 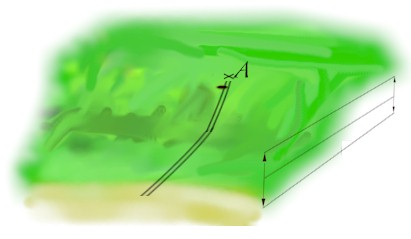 In a smart move, you declare your ball unplayable, take the one stroke penalty, and bring the ball back to within three feet to putt - this time with more experience.

Why can you move the ball out of bunker? Because, the ball must stay in the bunker only in options B and C listed above. You can always choose option A and move the ball, whether it is in or out of the bunker, to where you hit it from last (as long as it did not land in a water hazard).


For More Information
For further details on the unplayable ball, take a look at Rule 28 in the Official Rules of Golf.
The above article is meant to help clarify some of the basics above the rules of golf. If the above comes into conflict with local rules or the USGA, the latter two should always be taken as correct.